Bucca ‘e strumpu beach ends where Torre Beach begins, considered the “queen” of the beaches in this area. It is divided into “Sa spiaggia de is feminas” (women’s beach), right of the tower, and “Sa spiaggia de is mascus” (men’s beach), left of the tower. These names date back to the post-war period, when the two beaches were used separately by men and women. The stretch north of the tower features thick yellowish sand, in the backdrop of a pine forest. South of the tower the beach is quite different: the shore consists of small grey pebble stones and thin sand. It stretches all the way to a small granite promontory that separates it from Sa Marina Beach. The crystal clear waters of this beach boast a shallow sea bed that deepens slowly.

The main feature of this location is without a doubt the Spanish Tower dominating the landscape. The precise construction date is unknown, but it followed a 1580 edict by king Philip II of Spain. It is certain that it was already operational in 1597, as it is mentioned in the local church archives that the Alcalde of the Tower was a witness in a wedding on February 20th. 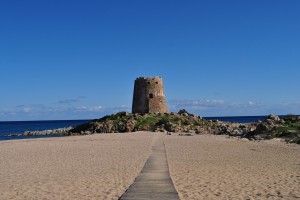 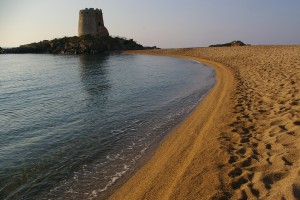 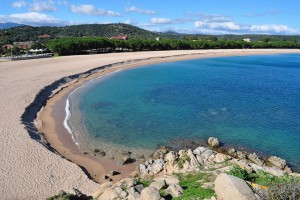 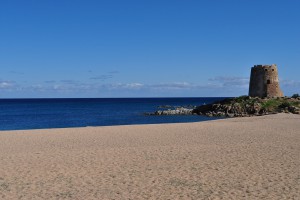 Basalt and granite rocks were used to build the tower, the construction materials available locally. According to some researchers, this tower should have been built slightly north of its current position, at Punta Niedda. For once, we are grateful to history that things went differently: it is rare that human intervention on nature creates such beauty and fascination in a place that would have otherwise been merely pretty.

Furthermore, the tower is also a place that holds particular religious significance, according to the locals. Every year in July, during the festivities of San Giovanni Battista, the “Su Nenniri” food festival takes place. These are wheat germs contained in a terracotta vase decorated with flowers and a cane cross. The rite of the festival requires that after the procession, the wheat germs be thrown into the water from the foot of the tower.

1. Best price guaranteed
Booking directly from our website you are sure to get the best available fare!

2. Exclusive Special Offers
Only booking via this website you can get exclusive special offers. For our direct customers, a welcome drink always free!

3. Direct contact with the Hotel
This is the official website of the La Torre Hotel and all the bookings are also confirmed via email. This gives us the opportunity to provide you with the best service and the solution most suitable for you!